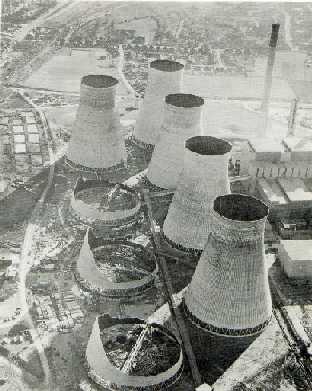 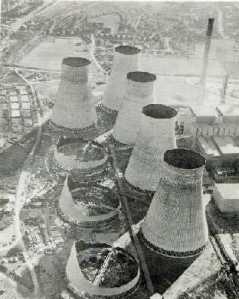 Whilst delivering a talk on Faceless’ Canals Connect project one of the participants told me a story about Ferrybridge Power Station. In 1965 3 of the cooling towers blew down in high wind. Although I would only be 1 at the time I though it strange that I had not heard about it. Such a big event would be part of local legend.

On further investigation it would turn out to be true.

On the 1st November 1965, during high winds, three out of a group of eight cooling towers at Ferrybridge ‘C’ Power Station collapsed, with the remaining towers sustaining severe structural damage.  The towers, each 375 feet high, had been constructed closer together than was usual and had greater shell diameters and shell surface area then any previous towers. The design and construction contract for the towers had been given to Film Cooling Towers (concrete) Ltd. in 1962.

High winds were considered to be the trigger for the collapse, but an inquiry found  the exact cause to be an amalgamation of several other factors in their design:

There had been, it was decided, a serious underestimation of the wind loading in the initial design.

Fortunately, no one was killed or injured in the accident.

Thanks to www.knottingley.org for the above information.